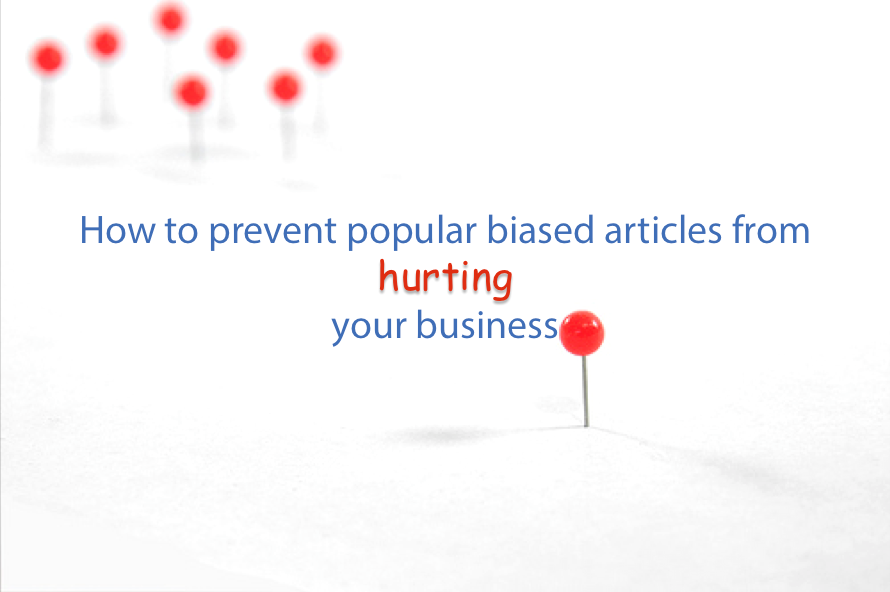 How to prevent biased articles from hurting your business

Currently, the Internet is filled with articles that have catchy headlines that promise you success in a few easy steps. It is inevitable to miss these headlines, since they show up on most popular online media outlet. These headlines direct you to a page, where information can be presented in the form of text, images and/or videos.

These headlines range from titles like “10 Books Recommended by Highly Successful People”, to “The 8 Keys to Incredible Life Success”, and even “4 Admirable Qualities from Donald Trump’s Presidential Campaign”.

These articles use the same way of coming to conclusions, namely: basing conclusions on a specific part of observations. In other words, the conclusions are based, for example, only on the activities of highly successful people, also called the survivors.

However, this method is, according to science, biased since it does not take not a larger sample, such as failured cases, into account. This type of phenomenon is referred to as survivorship bias.

Note that although these survivors have achieved great success and we can learn something from them, it is wrong to only examine survivors and draw conclusions based on them.

The following figure illustrates how it would look like if we would have a sample of 100 people (= 100%), and we would only look at 2 people who achieved success (= 2%) while performing the same activities. Note that these ratios can be even worse, and often are, such as one person (= 0,0001%) that achieves success out of every million people (= 100%). 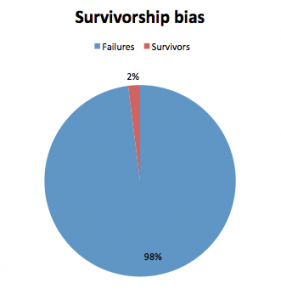 This survivorship bias makes it difficult to acknowledge and adopt strategies, tactics, and advice of survivors, because it ignores the fact that exactly the same did not work out for a lot of people. This can result to the adoption of wrong strategies, tactics, or advice and this will harm your business.

However, despite its negative impact, most popular online media outlet still publish biased articles that could harm your business.

How to recognize survivorship biased articles

Furthermore, you could search for academic literature that support the conclusions of an article, because biased studies are not allowed.

As an example, the health sector is an area where survivorship bias could lead to disastrous consequences. Imagine what would happen if medicines would be approved when they would help only one person regardless of the effects of the medicine on all the other people who also took it?

A lot of denied medicines will suddenly be approved.

Why? Because medicines don’t need to meet a prespecified ratio between survivors and failures any longer. This change could ruin your health, because it would approve medicines that are no good or even bad for the majority of people.

A popular misbelief is based on the cases of Richard Branson, Bill Gates, and Mark Zuckerberg. These cases are exceptional and exciting and therefore highly popular. In short, they all quit school and became billionaires with their business(es).

This gives the impression that if you quit school, and work on your business, you will become a billionaire.

Probably you know that most people who quit their college will not be successful, which is backed by science. Cardia and Praag (2008) found that top entrepreneurs are often top students who have a beta background.  However, nobody talks about the thousands of cases with failed projects, debt-heavy bank accounts, and half-finished degrees.

Furthermore, just look at the following figure that shows Facebook’s top management team in 2014. Do you see something interesting?

I do not want to suggest that the activities discussed in these success-promising articles could not help at all. I have read articles where I found the solutions quite useful, even though they were clearly biased.

However, I want to warn you about adopting beliefs or behaviors when the analysis is biased. This warning is because overvaluing the wrong strategies, tactics, or advice will harm your business. Therefore, it is important to keep your eyes wide open.

Question: Why do you think that there is such a strong focus on survivors?