How to develop a killer concept without even spending one dollar

Continue your reading if you like to know more about the conjoint analysis, and/or watch the video to get to know this powerful tool

Analytical attribute techniques enable the development of new product concepts by altering one or more of its current attributes, or by adding attributes, and to assess the desirability of these concepts. There is a range of quantitative and qualitative attribute analysis techniques available. Conjoint analysis is considered to be a quantitative technique.

What can a conjoint analysis do for you?

This technique can be used to develop high-potential concepts in the concept generation phase, but it’s also used in concept evaluation and even further along in the new products process (Crawford & Benedetto, 2011).

The conjoint analysis tool became popular as a research tool for commercial applications in a short time (Wittink et al, 1990). It is one of the most common analytical tools used to assess tradeoffs. It is furthermore used to analyze market needs and preferences, to segment the market according to the benefits sought and to test how well a concept will be accepted by the market (Crawford & Benedetto, 2011). It is considered as an early indicator of ultimate product success, at least for product line extensions. According to the survey of Mahjan and Wind (1991) the conjoint analysis is mainly used to improve ‘new products’ success. Participants from the survey indicate the conjoint analysis as the sixed most frequent used method. One limitation of this analysis is ‘the inability to capture the complexity of the market’. The conjoint analysis is considered to be a valued tool among managers within the new product development (Witting et. al, 1990).

Steps involved in a conjoint analysis

According to Green and Srinivasan, (1990), the conjoint analysis consists of six steps. Each step has an alternative method to conduct a conjoint analysis. The steps are included in table 1.

Table 1 gives an overall picture of the steps involved in the conjoint analysis. Every step has different methods to conduct the analysis. Because of the large number of alternative methods, only the full-profile conjoint analysis, with specific choices of methods is explained.

The conjoint analysis is a process whereby customers compare and evaluate a product based on their attributes or features. It is used to identify high potential gaps: combinations of attributes that (1) customers like and (2) are not on the market yet. It uses different regression analysis methods, e.g. monotone analysis of variance (MONANOVA), a data analysis technique to acquire patterns within the rank order data. The goal is to identify the customer’s underlying value system: which level of the key attributes are favored and which attributes are most valued (Crawford & Benedetto, 2011).

The result is insight to the levels of attributes that are preferred by customers and rank ordered the possible combinations from most to least preferred. Every combination could be seen as a concept. The top-ranking concept (or concepts) is the one that has the highest potential and should be considered for further development.

A graphical full-profile conjoint analysis output could look like figure 1a-b. The input came from a preference ranking of a respondent for a salsa consisting of three attributes: thickness (with three levels: Regular, Thick and Extra thick), spiciness (Mild, Medium-Hot and Extra-Hot) and color (with two levels: Red and Green). The best salsa would be a medium-thick, green, mild salsa in this case. Note that these are the levels of each attribute with the highest utilities in figure 1a.

Figure 1a illustrates a visual representation of the relative importance of the attributes. An attribute is considered to be more important than others when a large range in utilities is found. Therefore, spiciness is considered to be the most important attribute and color the least important. The graphical output illustrates also the level at which each attribute is favored. As illustrated, mild salsa is preferred over medium-hot or extra-hot, other attributes being equal. This specific customer also favors medium-thick salsa to both regular and extra-thick, and favors green salsa very slightly more than red salsa. 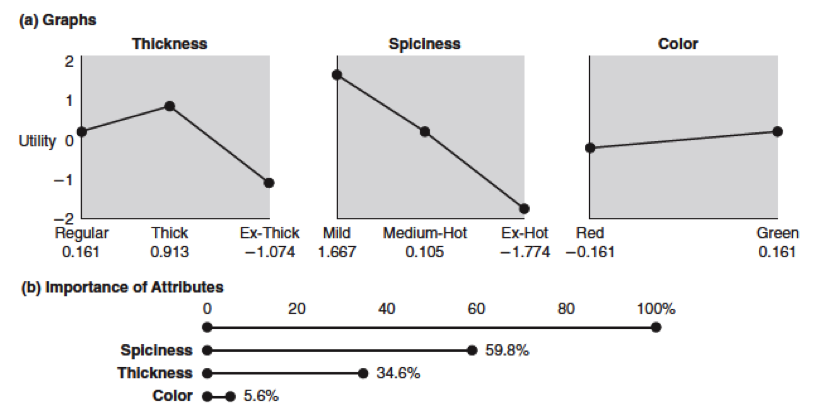 There are four practical decisions that one has to make in the fieldwork for the conjoint analysis according to Crawford & Benedetto (2011).

Question: How do you test your concepts at this moment?

How your vision statement can lead to powerful results

How to use management literature to improve your business

Too much bureaucracy kills innovation